A Call to all Artist-A Card Game for Mickie! 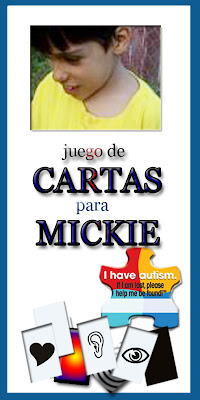 A few weeks ago, a blogger and artist friend of mine, Magarita Garcia Alonso, came up with the idea, or convoking a card game for Mickie.

Trying to brake barriers and find ways of communication and learn Mickie's world, by explaining our world.
Any persons interested-artists, graphic artists, drawers, sensitive people, All can participate by sending a drawing.

Something like Tarot Cards, in 10 cms x 5cms, with simple traces, or a line, a crayon, that will make up the game, where emotions will be present as well as the world around us.

Email ThisBlogThis!Share to TwitterShare to FacebookShare to Pinterest
Labels: a call to all artist, a card game for mickie, emotions

Six months ago Belle Isle youngster Melody Brook was full of life.Now an illness baffles medics has left the five-year-old struggling to speak, walk, feed herself or even support her head...

...Melody started showing symptoms a few days after having her joint measles, mumps and rubella (MMR) vaccination in July.

Read the rest of this article at AgeOfAutism.

A Message From Dr. Andrew Wakefield - The Truth About Public Health's Promotion of Vaccination 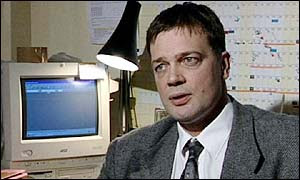 The Meaning of true Informed Consent in Vaccination "Response to Dr. Ari Brown and the Immunization Action Coalition"

As new parents we face decisions great and small; to inform them, our vocabulary expands to include new ideas, new worlds and phrases such as “sippy cup”, “Diaper Genie,” and “nasal syringe.” Open-minded, we spend hours researching car seats, organic mattresses, day care, the benefits of sleep schedules, and playgroups.

One of the most important decisions you’ll make is how to vaccinate your child. Educating yourself on the risks and benefits of vaccination is the first and most crucial step. Your baby’s doctor probably assumes that vaccines and the CDC-recommended vaccine schedule are safe, but you’ve heard rumors that there might be a connection to autism. Dr. Ari Brown has written an article called “Clear Answers and Smart Advice about Your Baby’s Shots” that makes it sound as if there is absolutely nothing to worry about.

What is the truth?

The American Academy of Pediatrics (AAP) and the American Academy of Family Practitioners believe that vaccines are one of the most significant public health measures of all time. We couldn’t agree more. But are there unnecessary risks for the individual? Don’t forget that antibiotics were rightly greeted with similar enthusiasm, but we now know that antibiotics can backfire, and that more isn’t always better. Is it possible that the same could be true for vaccines?

Vaccines are recommended, licensed, and assessed for safety by federal authorities including the FDA and CDC, but how comprehensive are the safety tests? We know from one large university study that early administration of the DTP shot is implicated in the development of asthma. Is it true that serious side effects are rare? Would the vaccine manufacturer’s safety testing methods even reveal a link to autism, if there were one?

The vaccine-autism controversy persists because the appointed watchdogs are willfully ignoring evidence concerning vaccine safety issues; the AAP’s response to parents’ concerns has been to just insist more and more vociferously that vaccines are safe. But denying it will not dispel the controversy. Shouldn’t they be insisting instead on really good testing? The research to date is inconclusive. No one can say yet with complete certainty that vaccines do or do not cause autism.
Nothing is more important that than the health of our children. Please read this article, print it out, and take it to your pediatrician. Share it with other parents. It will take you about the same amount of time to read this as it takes to research that car seat, and it will let you have a more thoughtful and informed discussion about vaccines with your baby’s doctor.

Click Here to Download a PDF of the "Response to Dr. Ari Brown and the Immunization Action Coalition", by Dr. Andrew Wakefield et al.
Thank you for your time and continued interest.

Thoughtful House Center for Children
With

[latest posting from the Coalition for Safe Minds]

BACKGROUND: During Monday's third stakeholder meeting by Institute of Medicine to review priorities in the National Vaccine Plan, panel members Dr. Louis Z. Cooper, (ex-head of the American Academy of Pediatrics) and Dr. Samuel Katz (one of the principal architects of US vaccine policy) stated that more honesty in communications with parents with regard to vaccines were needed. Dr. Cooper added that communication should be coordinated and based on sound vaccine safety science and noted that that the Centers for Disease Control (CDC) spent $300 billion on the promotion of vaccines, while spending only $20 billion on vaccine safety research. Dr. Cooper stated that this sound science had been "done on the cheap" and was seriously deficient.

Many public comments at this meeting centered on parents concerns on lack of information received from physicians on vaccine risks and the need for a comprehensive study of vaccinated and unvaccinated populations to determine total health outcomes, possible detrimental effects of current timeline of immunization schedule and the number of vaccines given at any one time.

In sharp contrast, CDC's Glen Nowak, CDC's Media Director, response was "less is more" in terms of information given to parents. During yesterday's Interagency Autism Coordinating Committee (IACC) meeting, NVAC's Dr. Gellin stated that parent concerns were not limited to the autism community and the need to address these concerns to restore the public's trust in the immunization program.