ATLANTA – As millions of Americans remain concerned about government-recommended flu shots, dozens of citizens dressed in full haz-mat suits will gather Wednesday, October 21, at the entrance to the Centers For Disease Control (CDC) to greet arriving members of the Advisory Committee on Immunization Practices. Those advisors are meeting, Wednesday, starting at 8:00am. The event is designed to dramatize the toxicity of the H1N1 vaccine and Flu shot as they meet to discuss the H1N1 vaccine.

“We want the public to see just how toxic these vaccines are. If a vaccine vile is spilled, a haz-mat team is required for clean-up and the vaccine must be disposed of as biohazardous waste. Since when has the human body been deemed a toxic waste dump?” asks Karey Williams of Moms Against Mercury.

These protesters believe government health officials have not told all they know about the potential hazards of the H1N1 vaccine and the seasonal flu shot which they are also recommending. Officials do not deny that many flu vaccines will contain Thimerosal, a mercury based preservative, and a number of other toxins including ethylene glycol (antifreeze), formaldehyde, phenol, and antibiotics.

Thimerosal has been linked to neurodevelopmental disorders. Government-mandated warnings known as Material Safety Data Sheets warn of mild to severe mental retardation in unborn infants exposed in utero, yet flu shots are recommended by the CDC to all pregnant women.

According to Dr. Joseph Mercola, board-certified family physician, H1N1 vaccines made by Novartis and GlaxoSmithKline both contain immune system boosters known as squalene. One of them, known as MF-59, has yet to be approved by the FDA and has been linked to the Gulf War Syndrome.

“ Two studies out this month point to evidence that mercury in vaccines causes neurological damage. One found 1 in 71 vaccinated children born in the 1990’s, have received an autism diagnosis. Another study discovered brain damage in newborn monkeys who were given a mercury-containing Hepatitis B vaccine,” says Scott Laster of SafeMinds.

The protest starts at 7:30am on Wednesday, October 21, 2009, at the gates of the CDC at 1600 Clifton Road, as the participants for the ACIP meeting arrive.

The Object of His Obsession 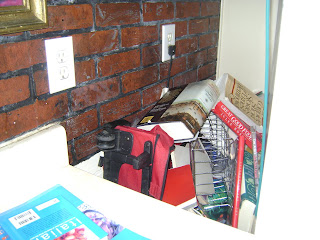 One of the things that an Autism diagnosis takes from a home, is the sense of normalcy. I remember, that it took me about a year to come to the realization, that life as I knew it, was over and that there was no turning back.

For the past two years or so, cooking has become a struggle. Mickie would cry for as long as I was preparing his sisters food. He wanted everything that I was cooking, but the couldn't eat any of it, an account that his diet is very restricted-SCD,GFCF, etc.

By the end of every evening my head would be hurting and his sister and I were unable to enjoy our meal. For the last eight months I gave up cooking all together.

For months, Mickie had been placing random items behind the refrigerator, Anything from his blankets, to his shoes, backpack, lunch pail, plates, spoons and then it escalated to the burners and grids from the stove. He had started with little things like trash and spoons, but as with all obsessions, a little was not enough for him and he soon started moving the refrigerator forward in order to fit bigger items.

He would put things behind the refrigerator throughout the day-one thing here, one thing there. He then continued in the middle of the night. I remember waking up to the noise of items trickling down the back of the refrigerator and not even my Shakespeare and Hemingway books were spared.

Every morning after I sent him off to school, I would start the tedious task of sorting through the vast amounts of stuff, stuck behind the fridge, which would take me anywhere from thirty minutes to 3 hours.

One morning in particular, I walked into the kitchen area, to find my frail looking boy carrying the Microwave oven across the room towards the table, so I took it out to the garage area. 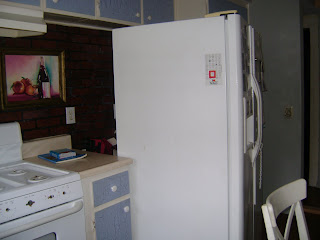 Fresh flowers and plants behind the sink were now a memory, as they would end up torn up, all over the floor.

Having a trashcan, became impossible, as he would turn it upside down and many times eat food items that he found in it.

My mom had suggested a wall around the kitchen with a door I could lock. I toiled with the idea for the passed year and finally decided to try it.

With nothing more then a wall, the object of Mickie's obsession, was eliminated. The kitchen is now a separate room. After years of struggling with this issue, it has been solved and it didn't take psychotic medication nor biomedical interventions, nor hours of research on the Internet.

I remember wondering that now that he had no access to the kitchen, what would he go after next? I guess I will worry about crossing that bridge, when I get to it. In the mean time, I'm enjoying a much calmer Mickie and the fresh flowers in my kitchen again.
Posted by ~Zurama Arencibia Nuñez~ at 3:42 PM No comments: