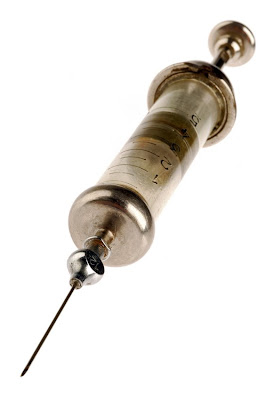 This is part of an article from the Health Ranger Website. Mike Adams the NaturalNews Editor writes:

"I probably don't need to remind you that in 1976, a failed swine flu vaccine caused irreparable damage to the nervous systems of hundreds of people, paralyzing many. Medical doctors gave the problem a name, of course, to make it sound like they knew what they were talking about: Guillain-Barre syndrome. (Notably, they never called it "Toxic Vaccine Syndrome" because that would be too informative.)"

#1 - The vaccine production was "rushed" and the vaccine has never been tested on humans. Do you like to play guinea pig for Big Pharma? If so, line up for your swine flu vaccine this fall...

#2 - Swine flu vaccines contain dangerous adjuvants that cause an inflammatory response in the body. This is why they are suspected of causing autism and other neurological disorders.

#3 - The swine flu vaccine could actually increase your risk of death from swine flu by altering (or suppressing) your immune system response. There is zero evidence that even seasonal flu shots offer any meaningful protection for people who take the jabs. Vaccines are the snake oil of modern medicine.

#4 - Doctors still don't know why the 1976 swine flu vaccines paralyzed so many people. And that means they really have no clue whether the upcoming vaccine might cause the same devastating side effects. (And they're not testing it, either...)

#5 - Even if the swine flu vaccine kills you, the drug companies aren't responsible. The U.S. government has granted drug companies complete immunity against vaccine product liability. Thanks to that blanket immunity, drug companies have no incentive to make safe vaccines, because they only get paid based on quantity, not safety (zero liability).

#6 - No swine flu vaccine works as well as vitamin D to protect you from influenza. That's an inconvenient scientific fact that the U.S. government, the FDA and Big Pharma hope the people never realize.

#7 - Even if the swine flu vaccine actually works, mathematically speaking if everyone else around you gets the vaccine, you don't need one! (Because it can't spread through the population you hang with.) So even if you believe in the vaccine, all you need to do is encourage your friends to go get vaccinated...

#8 - Drug companies are making billions of dollars from the production of swine flu vaccines. That money comes out of your pocket -- even if you don't get the jab -- because it's all paid by the taxpayers.

#9 - When people start dying in larger numbers from the swine flu, rest assured that many of them will be the very people who got the swine flu vaccine. Doctors will explain this away with their typical Big Pharma logic: "The number saved is far greater than the number lost." Of course, the number "saved" is entirely fictional... imaginary... and exists only in their own warped heads.

#10 - The swine flu vaccine centers that will crop up all over the world in the coming months aren't completely useless: They will provide an easy way to identify large groups of really stupid people. (Too bad there isn't some sort of blue dye that we could tag 'em with for future reference...)
Posted by ~Zurama Arencibia Nuñez~ at 11:50 AM 2 comments:

A Box to Protect the TV Set 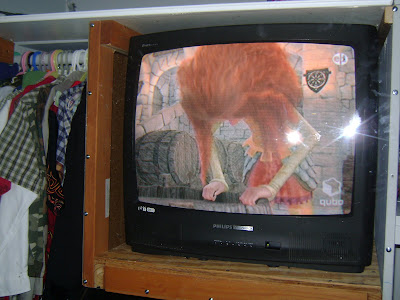 I wanted to share this, with parents who have autistic children, that tend to be destructive with electronics. I remember a few years ago having a conversation with a mom from Sacramento, who's son had severe autism and had already broken dozens of VCRs. Little did I know that I would be facing the same dilemma a few years later.

Mickie has always like watching TV and right around the time of his diagnosis liked it more then his own family-which wasn't a good thing. If someone stood in front of his view, he would just look around them as if people were mere objects.

Over the course of the last three years, he has gone from watching some TV to nothing at all. First he wanted the same DVD to play day and night then one day he just unplugged the DVD Player and the TV set.

Before he just gave up on TV, he broke quite a few DVD players and had many meltdowns because he would turn the channel and get a fuzzy screen, then wanted it changed back to the right channel, but didn't know how. One night after midnight he came to my door and took me by the hand so I could change the channel for him. He did this thirty times. I guess this is what psychology calls Obsessive Compulsive Disorder, but in Mickie it's multiplied times 10.

So for the last few months he hasn't watched anything and it bothers me, because he can always learn something even from a TV show, and he is so sensitive to people voices that it's impossible to get him to pay attention. 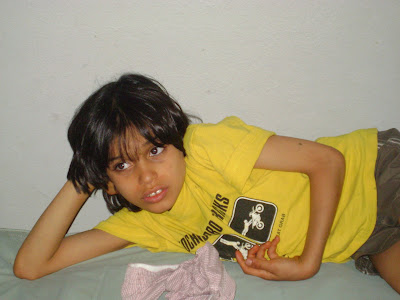 Recently while talking with my mom about this, she came up with the idea of building a Wood box in the closed and placing a TV inside, then covering the front with Plexiglas. Mom is always fool of ideas and she always comes to the rescue when I am at a loss for ideas.

This week I was lucky enough to find a good Samaritan who was nice enough to build the box we needed. From the room next to his, I control the digital box and the Television. He can't turn it on nor off. Last night I got everything to work and Mickie couldn't have been more thrilled.

When he got home from school today and walked in his room, and noticed the cartoons were playing on his TV, he smiled and that was all I needed to make my day.
Posted by ~Zurama Arencibia Nuñez~ at 6:52 PM 4 comments: 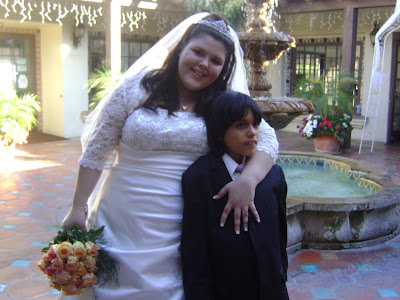 It would have been a disaster if not for my mother's help who took care of Mickie throughout the day.

I sent Mickie to school in the morning since his school's schedule is a little different then public school. At 1:00, my mom was waiting for him.

When he got home she fed him and took him with her so I could get ready for the special day.

Everything went smoothly except for Mickie's two bruised eyes. He left for school with his face just fine, but had a meltdown at school during waiting time-he hates to wait and hit his eyes, giving himself two cuts under the eyes.

During the wedding my mom kept an eye on him. He loved the food, especially the meat-he does so love his meat, though he can't have to much of it, due to the digestive issues. I was really surprised by how calm he remained during the ceremony and the music playing.

He must have been concentrating on the sounds of the music, during the conga line the best man started, because the next day he was whistling Gloria Stefan's Conga song, without missing a note.

It was a great day and my Zina was very happy!
Posted by ~Zurama Arencibia Nuñez~ at 9:59 AM 2 comments: